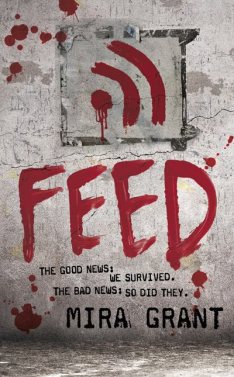 When I think of the typical zombie narrative, it’s the blood, the screams and a hoard of lurching dead bodies seeking to entrap and devour that I recognize as the key elements of the zombie genre.  Feed has all of these characteristics–don’t get me wrong.  But what sets Mira Grant’s story aside from others is the sharp dialogue, lovable characters and a level of intrigue rivaling the best conspiracy stories on the market.  In a word, Grant’s zombie narrative is smart.

Feed is told from the perspective of Georgia Mason, who is determined to tell the truth.  Centering on a group of bloggers in a post-apocalyptic zombie future, a delicious conspiracy unfolds when Georgia and Shaun Mason are invited to follow a Senator on his political campaign.  The stakes rise as “accidents” start happening and people start dying. Interspersed with a detailed history of how the zombie virus came into being, Georgia and Shaun discover just how far the conspiracy goes.

Using a zombie virus to comment on terrorism and bio-warfare is clever; Grant’s research into virology is extensive and fascinating. It’s not surprising that her love of epidemiology and zombie-lore fed (excuse the pun) into a story that sought to find a better answer for the “why” and the “how” of zombies.  Aside from the intrigue, the characters are entirely lovable.  Georgia & Shaun form a “bromance” of sorts where other stories might have inserted a love interest into the action, Grant chose a unique approach.  The sibling’s fierce loyalty for each other is refreshing.  Paired with witty and fast-paced dialogue, it makes Feed a snappy read.

Lots of reviewers mention the tedious nature of repeating the blood testing scenes as well as a few other moments.  Although there are some scenes that do repeat themselves, it does little to slow the pace of the novel.  In some ways these moments (such as the blood testing in particular) are a strategic build of suspense.  Every time Georgia and Shaun take the blood tests, you have to wonder: are they going to be infected?  Suspense is built through dialogue too.  Every time Georgia and Shaun say “One…” “Two…” “Three…” (a count down to the test) the implied threat of impending zombification builds.

If you love zombies, Grant’s got you covered.  If you love conspiracy, a well-built futuristic world and an intricate plot, this is the book for you.  Readers who are looking for an inventive twist on the zombie story will love Feed, because this story doesn’t just have guts, it also has brains.